This tea service features the faces of “Madeleine and Her Dream Team,” Secretary of State Madeleine Albright and six of her foreign minister counterparts: Igor Ivanov (Russia), Robin Cook (United Kingdom), Hubert Vedrine (France), Joschka Fischer (Germany), Lloyd Axworthy (Canada), and Lamberto Dini (Italy). It was presented to Secretary Albright by Ivanov in early 2001, as her tenure came to a close. 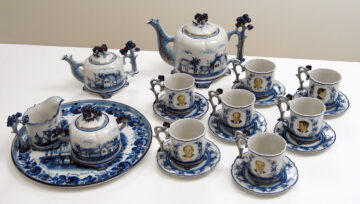