This artwork was given to Bruce Laingen, one of the 52 American hostages held in Iran for 444 days from 1979-1981. It depicts President Jimmy Carter and the iconic symbol of the hope for the hostages’ safe release – a yellow ribbon – tied around a tree. One of a series of 52 produced, a note on the back of the frame indicates that the artist gave one to each of the hostages. After their release on January 20, 1981, the hostages received numerous letters, official proclamations, and artworks from across the country. Bruce Laingen was a Foreign Service Officer and the most senior official at the U.S. embassy, serving as Chargé d'Affaires (the person in charge) since there was no U.S. ambassador to Iran at that time. 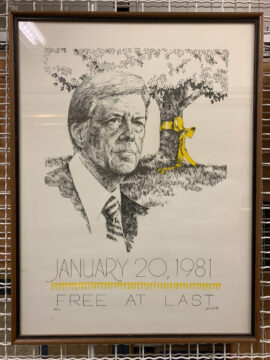