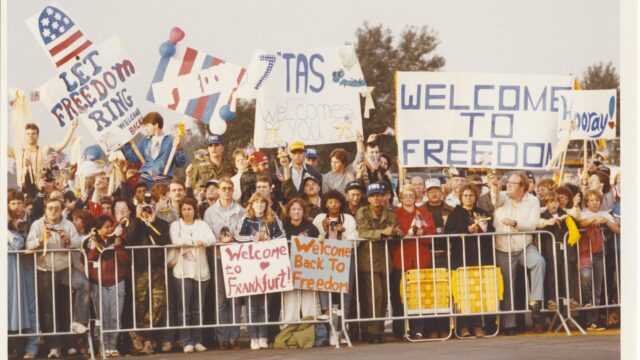 In November 1979, 52 Americans in the U.S. Embassy in Tehran were taken hostage by Iranian students. Everyone, from the most junior staff members to the person in charge of the embassy, were taken and held in captivity for 444 days. Closely following the crisis for over a year, the public wanted to show their support for the hostages and their families. Yellow ribbons became the symbol of hope for their safe return.

But why a yellow ribbon? It starts with a diplomat’s wife and a popular song.

A yellow ribbon: A symbol of national support

Bruce Laingen, a State Department foreign service officer, was the Chargé d’Affaires of the U.S. Embassy in Tehran. Given his role as the person in charge of the embassy at the time, he came to be seen as the informal leader of the hostages, even after their release. His wife, Penne Laingen, also took on a leadership role and was heavily involved in supporting and organizing the families of the hostages.  In an interview with Penne Laingen during the crisis, a reporter was shocked by her calm demeanor, expecting her to be outwardly angry toward Iran and Iranians. However, Penne thought that demonstrations of violence and anger would not help the hostages’ predicament. As she recalled in an oral history, when asked what Americans should do to instead, Penne told the reporter:

The yellow ribbon refers to a popular song, “Tie a Yellow Ribbon Round the Ole Oak Tree,” written in 1972 and released in 1973 by the group Tony Orlando and Dawn. It became a hit. Many artists subsequently covered the song, from Frank Sinatra to Dolly Parton. While the song itself has nothing to do with being taken hostage, it was a familiar tune that reminded the public of the hope and anticipation of welcoming a loved one home.

After Penne Laingen’s suggestion in the interview, the yellow ribbon started to spread. It began with the other hostages’ families, and by the end of the crisis had become a cultural phenomenon. Penne Laingen was even asked to tie a yellow ribbon around the National Christmas Tree outside of the White House.

Upon their release on January 20, 1981, the hostages’ first stopover was in West Germany, at the U.S. Air Force base in Wiesbaden for medical checkups and treatment.

Crowds gathered to celebrate the hostages at that first stop in Germany. They created homemade signs and waved yellow ribbons to welcome the hostages as they exited the plane.

After about four days in Germany, the hostages continued onward to the United States. During their sendoff, even the military band paid homage to the yellow ribbon’s symbolism, playing “Tie a Yellow Ribbon Round the Ole Oak Tree” as they boarded the plane. A Washington Post article dubbed the song as the “unofficial hostage theme.”

On January 25, 1981, the released hostages landed at Stewart Airport, a small airport in New York situated a short drive from West Point.

At Stewart Airport the staff rolled out a literal yellow carpet for their arrival. Ann Swift, one of the hostages whose “welcome home” items are in the National Museum of American Diplomacy (NMAD) collection, received a certificate commemorating their return which included a small piece of the yellow carpet they were greeted by.

Because of the crowds, the typically 20-minute drive from the airport to the hotel took over an hour. The Washington Post article detailing the journey states: 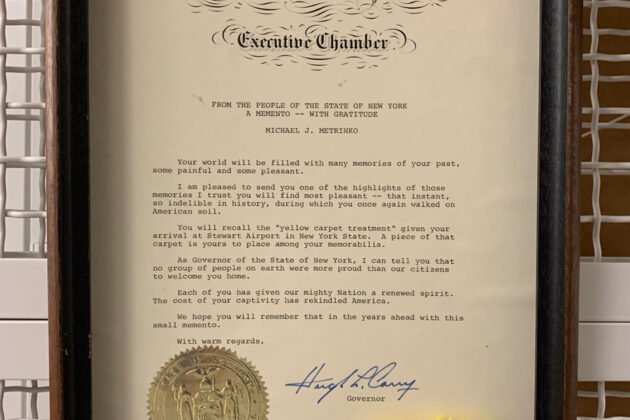 A certificate presented to Ann Swift by the Governor of New York—along with a section of the yellow carpet from their welcoming ceremony—commemorating the group’s arrival at Stewart Airport on January 20, 1981. Gift of Paul D. Cronin.
View the Yellow Carpet Memento

During the more than 14 months that the hostages were held, the crisis became a “national preoccupation”—a phrase used in an article in the Washington Post just after their release. NMAD’s collection includes a telegram that serves as evidence of this being a national phenomenon. This telegram paints a vivid picture of how the employees of a company in Idaho came together to pay tribute to the hostages’ homecoming. The telegram reads:

“Tonight, 53 employees of Sun Valley Company, each bearing a brightly lit torch, skied down Idaho’s magnificent Mount Baldy mountain in celebration of your joyous return to the USA. That flaming yellow ribbon, winding through tree-lined trails, was cheered by residents and guests of the sister communities of Sun Valley and Ketchum, Idaho.”

By the end of the hostage crisis, the yellow ribbon’s appearance had become a national phenomenon. The yellow ribbon even appeared prominently at the Super Bowl. By chance, the big game was on January 25: the day the hostages landed in the United States. A giant yellow ribbon adorned the Superdome in New Orleans and the cheerleaders wove yellow streamers. The players even had yellow stripes on their helmets.

The Frontlines of Diplomacy

This story reminds us of the challenging and dangerous work diplomats face when serving abroad. We can tell this story because of the stories and artifacts given to us by the diplomatic community.  We are forever grateful to Bruce Laingen, Ann Swift’s husband Paul Cronin, John Limbert, Kate Koob, and Roy Apel for their artifact donations and to all the diplomats for their service.

Interested in supporting our museum and the stories of diplomacy? The museum is seeking support to complete the development and construction of our permanent exhibits. Click here to find out how you can support the museum.