Kathryn Koob was a Foreign Service Officer who was serving in Tehran when the American embassy was seized by Iranian militants on Nov. 4, 1979. She became one of two women who were held hostage during the entire ordeal. Koob is a person of deep faith, which sustained her while held captive. She had previously been a member of Messiah Lutheran Church while living in Alexandria, Virginia. A member of that church, Bev Appleby, had designed this cross specifically for members of their congregation. After Koob had been taken hostage, Bev Appleby sent one of these crosses to Koob’s sister, who sent it on to Kathryn in Iran. She received it and wore it while captive, and a photo with the cross clearly visible around her neck was taken and shared in the press. As a result, Bev Appleby’s cross design became known as the “Hostage Cross” and she received requests for them from the public. This particular cross is one of a handful that Bev Appleby gave her upon her return home to the United States. 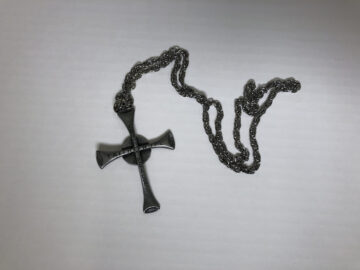