George W. Guthrie served as U.S. Ambassador to Japan (1913-1917). As ambassador, he kept the U.S-Japan bilateral relationship on an even keel as war spread into Asia and the Pacific in 1914 and as President Woodrow Wilson attempted to maintain neutrality. Guthrie and his wife Florence successfully managed this complex relationship, gaining high respect from the Japanese. They were invited to represent the United States at the coronation of Emperor Taisho in November 1915. This set of commemorative postcards, saved as a souvenir by Florence Guthrie, marked the coronation ceremonies for Emperor Taisho and depict the Emperor and his wife. 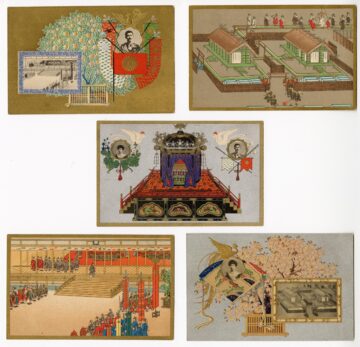