Taken on December 23, 1945, this is a staff photo of the Department of State’s Near East Division while they gathered for a Christmas party. Loy W. Henderson, who was known as “Mr. Foreign Service” during the latter part of his long career, is pictured in the front row third from right. The Department of State’s main auditorium is named in Henderson’s honor. 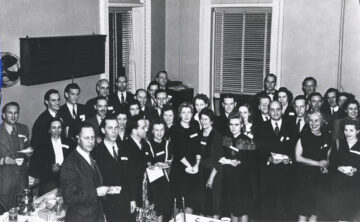