The Soviet Union deployed SCUD missiles and launchers to Soviet-bloc countries as part of the military build-up in Eastern Europe during the Cold War. The warheads were kept in the Soviet Union and could be paired quickly with the missiles and launchers in the event of conflict. This nose cone was mounted to the very top of a SCUD missile and did not contain a weapon. Its purpose was to increase the aerodynamics of the missile aimed at its target. In 1991, the Soviet Union withdrew their troops from Hungary, but left the SCUD missiles behind. The United States assisted with the destruction of this equipment. Kurt Volker, Political-Military Officer at U.S. Embassy Budapest 1994-1997, was the liaison for this program. He was given this nose cone as a memento. 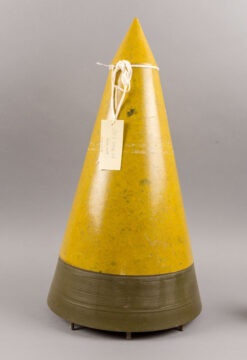