Following a deteriorating security situation in Libya and attacks on U.S. properties elsewhere in the region, the U.S. government compound in the Libyan city of Benghazi came under a heavy and deadly attack on the evening of September 11, 2012. The U.S. Ambassador to Libya, J. Christopher Stevens was at the compound at the time. He and three other American colleagues were killed during this attack. To honor the fallen and condemn the attackers, the U.S. House of Representatives passed House Resolution 786. The resolution was sponsored by Speaker of the House John A. Boehner and co-sponsored by House Majority Leader Eric Cantor, House Minority Leader Nancy Pelosi, and House Minority Whip Steny H. Hoyer. This copy with original signatures was presented to Under Secretary of State Patrick F. Kennedy, who was serving as Under Secretary for Management at the Department of State at the time. 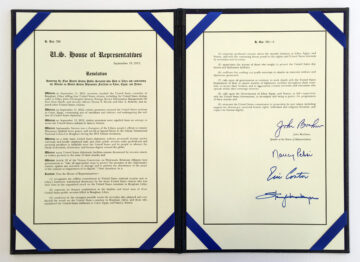