“We are Americans” Note

After the 9/11 attacks, U.S. embassies and consulates around the world became memorial sites, filled with offerings of all kinds. Condolence gifts included flowers, candles, personal notes, drawings, and mementos. International first responders also expressed their sorrow at the loss of so many who had given their lives in the face of tragedy. This note from two Germans invokes President John F. Kennedy’s famous 1963 “Ich bin ein Berliner” speech and expresses solidarity, writing (translated): "Kennedy said, I am a Berliner. We say, we are Americans. Sarah + Siggi." 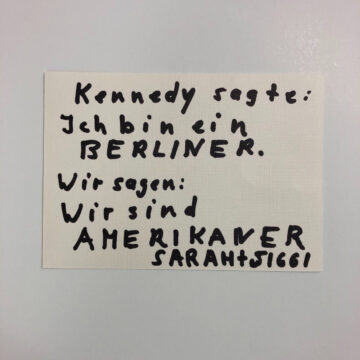 "We are Americans" Note. 2001. National Museum of American Diplomacy, https://diplomacy.state.gov/items/we-are-americans-note