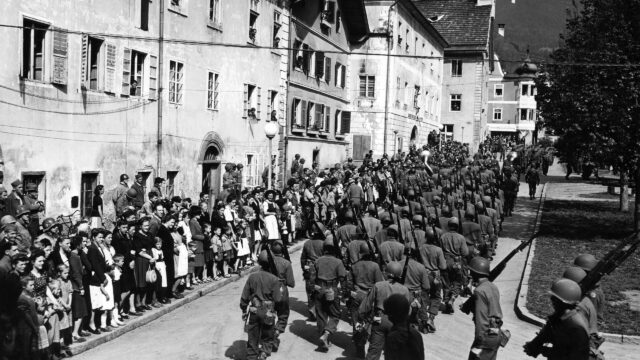 May 8th is celebrated in Europe and in the United States as Victory in Europe Day, or V-E Day. On this day in 1945, the Allied forces accepted the unconditional surrender of Nazi Germany, paving the way for the end of World War II.

During the war, the port of Antwerp, Belgium was crucial for logistical support for Allied forces. On October 12, 1944, Nazi forces commenced V-bomb attacks on both Antwerp and London. Known as Vergeltungswaffe (vengeance weapon), V-bombs were imprecise and killed almost exclusively civilians. By March 1945, more V-bombs had fallen on greater Antwerp than London.

The V-bomb attacks in Antwerp killed more than 3,400 civilians and 700 allied service personnel. In almost six months of terror, there were just 12 days when no bombs fell.

During this entire time, Foreign Service Officer James H. Keeley bravely served as Consul General at U.S. Consulate Antwerp. For his successful efforts during wartime, President Truman awarded him this Medal of Freedom in 1945.

Keeley is credited as contributing “…greatly to the maintaining of security and the averting of panic among the civilian population of Antwerp.” Keeley also gave credit to the bravery and endurance of the local Belgian consulate staff who did not leave the post.