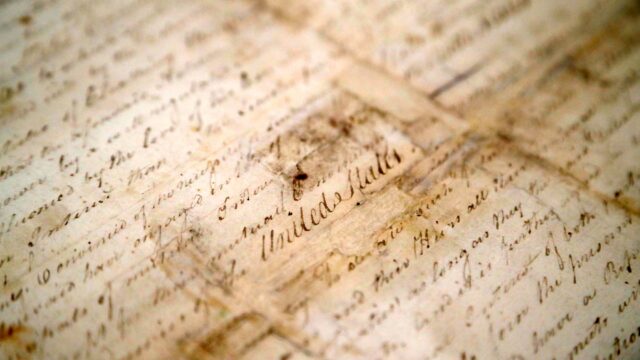 1778 Treaty of Fort Pitt: U.S. Treaty-Making with the Lenape Nation

During the Revolutionary War, one of the United States’ earliest treaties was with the Lenape (Delaware) nation aimed at building an alliance against the British: the Treaty of Fort Pitt. Why did this treaty differ from the French alliance earlier that year? And why did it so quickly fall apart?

In 1778, after news came from France that the Treaty of Amity and Commerce and the Treaty of Alliance had been secured, the Continental Army planned to march forces west and attack the British at Detroit. But the route crossed Lenape territory in the Ohio Valley.

The United States appointed brothers Andrew and Thomas Lewis as official diplomats to secure permission from the Lenape to cross through their lands. Congress appropriated $10,000 for goods and gifts to present to the Lenape leaders to show the United States’ goodwill.

No one is certain which language the Lenape and Americans spoke during the negotiations, but it was most likely a mixture of Algonquian dialects and English. But both communicated using the diplomatic tools that had been established between Native nations and European nations when the American colonies had been part of the British empire.

The American diplomats greeted their Lenape counterparts as “Brothers” and “the Chief and Wise men of the Delaware nation.” They explained why they had sought the negotiations, acknowledging that “the Chain of Friendship” (between the Americans and the British) had “Contracted some Rust, of a very Dangerous Nature” and were in need of Lenape assistance.

The Lenape presented the Lewis brothers with a belt of white wampum showing, in black, the 13 United States and the Lenape nation in a visual chain of the alliance. Wampum belts were a symbolic tool of treaty-making in some Native nations that showed parties in a kinship relationship.

The Americans also announced the recent alliance with France and offered to extend that “Bright and Extensive Chain” of “friendship and assistance” to the Lenape nation. The Lenape had an alliance with the French and interpreted this announcement as an expansion of existing Native American and European kinship networks that had been cultivated for centuries.

The negotiations lasted several days. On September 17, 1778, they signed a treaty called the Treaty of Fort Pitt, promising a “perpetual peace and friendship” between the two nations.

In the text of the signed treaty, the Lenape agreed to permit the Continental Army to cross across their lands, guide them to British locations, and to “join the troops of the United States.”

In return, the Americans promised to build a fort in Lenape territory for protection and promised trade goods. In addition, the treaty provided for the creation of a 14th state governed by Native Americans with a political representative in the U.S. Congress.

The Treaty of Fort Pitt Quickly Breaks Down

Like Franklin’s negotiations with the French, the Americans’ diplomacy with the Lenape leaders was conducted with mutual respect and discussions of each nation’s self-interest. In both cases, the treaty-making process involved diplomacy using traditional norms. Unlike the French alliance that lasted beyond the conclusion of the American Revolution, however, the Treaty of Fort Pitt began to crumble within weeks.

First, the Lenape leader White Eyes died. While American officials insisted White Eyes died from smallpox as the cause, evidence indicated members of the militia murdered him, and the circumstances remain unclear to this day. This act showed the Lenape that the Americans did not value nor honor the importance of kinship alliances.

Second, the Americans lacked cultural awareness when negotiating with the Lenape. To the United States, a signed paper treaty made the terms of the agreement final and ended the treaty-making process. This is what the Americans and French mutually understood after the signing of their alliance. But for the Lenape, the relationship built during the negotiations was dynamic and needed cultivation to continue the alliance. The paper treaty represented the relationship’s beginnings, not the end.

Most importantly, the Americans did not keep their treaty promises. The trade goods never arrived. The U.S. Congress never discussed the creation of a sovereign 14th Native American state. The United States hastily built a fort in Lenape territory, Fort Laurens, but the British quickly took it over. The U.S. government also failed to prevent white Americans from occupying Lenape lands.

The Lenape Attempt to Salvage the Treaty

The Lenape people initially tried to salvage their alliance with the United States.

First, a Lenape delegation went to the Continental Congress asking for them to uphold their promises. In addition, some Lenape warriors assisted the Continental Army, but after it became clear that the alliance was broken, more Lenape joined the British against the Americans. The United States used this as an excuse to declare that the Lenape had broken the terms of the treaty and made no diplomatic attempts to mend the relationship.

Violence committed against the Lenape, lack of cultural awareness, and poor diplomatic communication were only some of the problems that led to the breakdown of the Treaty of Fort Pitt. Similar problems continued between the United States and sovereign Native Americans for years to come.

The National Museum of American Diplomacy thanks Dr. Margaret Ball, Historian at the Office of the Historian, U.S. Department of State, for her thoughtful contributions to this blog.

Randolph Chandler Downes, Council Fires on the Upper Ohio: A Narrative of Indian Affairs in the Upper Ohio Valley until 1795 (Pittsburgh: University of Pittsburgh Press, 1969).

Amy C. Schutt, Peoples of the River Valleys: The Odyssey of the Delaware Indians (Philadelphia: University of Pennsylvania Press, 2007).

Eric Sterner, “The Treaty of Fort Pitt: The First U.S.-American Indian Treaty,” in Journal of the American Revolution

Museum of the American Revolution

National Museum of the American Indian