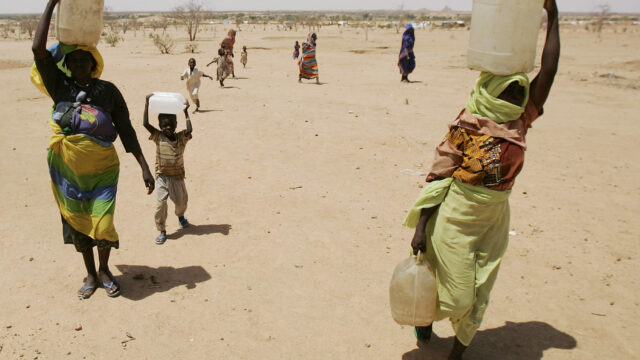 Peacebuilding: The Challenge of Darfur

In 2003 a rebellion broke out in the western region of Sudan known as Darfur. It is now 2009. To mediate the conflict, a summit has been called with representatives from the non-governmental organization community, the African Union, the United Nations, and the countries of Sudan, China, and the United States.
Download .ZIP of All Simulation Materials (ZIP 3 MB)

In 2003 a rebellion broke out in the western region of Sudan known as Darfur. As part of the effort to defeat the rebel groups, the Sudanese government armed local militias called the “Janjaweed.” It is now 2009. Over the past 6 years, the Janjaweed have been attacking civilians from ethnic groups associated with the rebels, often with direct support from government forces. The United Nations estimates more than 2.1 million people have been displaced, and as many as 70,000 have been killed. To mediate the conflict, a summit has been called with representatives from the non-governmental organization community, the African Union, the United Nations, and the countries of Sudan, China, and the United States.

In this historical simulation, students will take on the roles of the U.S. Department of State and other key stakeholders as they negotiate to end the violence, including mass atrocity crimes, against civilians in Darfur. The exercise will develop skills in critical thinking, collaboration, problem-solving, communication, and global competence.

Genocide as a Global Challenge

Central to the Darfur crisis is the issue of genocide, or the deliberate destruction of a group of people. Genocide is a crime under international law. According to the responsibility to protect, a human rights norm, the international community must use appropriate diplomatic, humanitarian, and other peaceful interventions if a country fails to prevent genocide on its own. Therefore, the label of “genocide” is politically significant. If the killing in Sudan is not deemed genocide, but rather a consequence of civil war, as the Sudanese government claims, it could be considered an internal Sudanese matter. Does the Sudanese government’s organized violence against a specific segment of its population justify international intervention? Given the legal and moral complexities, how can the United States and other global leaders fight atrocities while respecting national sovereignty?

The U.S. Department of State develops and supports strategies to protect civilians and stabilize communities in conflict. It works with other U.S. Government agencies to scan the horizon for atrocity risks and identify interventions that can change the incentives for potential perpetrators of mass violence. In addition, the State Department provides aid for victims of conflict and backs international efforts to investigate, document, and prosecute atrocities around the globe.

Please find below short videos from experts in the field to aid discussion and exploration of a topic.