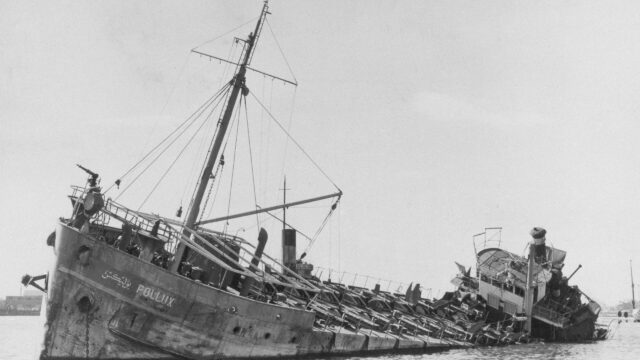 The Suez Canal was completed in 1869 to connect the Mediterranean and Red Seas, creating an essential waterway for global trade, as ships no longer had to navigate around the Horn of Africa.

At the time it opened, the canal was 164 kilometers, or roughly 100 miles, long. Without the canal, the circumnavigation around Africa is 9,654 kilometers or 6,000 miles. For most of its existence, the canal was managed by the Suez Canal Company which was owned by Great Britain and France.

On July 26, 1956, Egyptian president Gamal Abdel Nassar nationalized the canal, intending to take control of the canal’s operation and its revenue.

The world was still recovering from World War II with new national border conflicts and the onset of the Cold War. Many nations depended on the Suez Canal, especially Great Britain and France.

How would they manage their economic and political interests while avoiding conflict?

How would the United States and the Soviet Union support Nassar’s quest for Egypt’s sovereignty and Israel?

How would Great Britain, France, the United States, Israel, and the Soviet Union manage their own economic and political interests while avoiding military conflict?

How would Egypt preserve its national sovereignty?

In this historical scenario, students will have to overcome differing national interests to maintain global security and peace. The exercise will develop skills in leadership, collaboration, composure, analysis, communication, awareness, management, innovation, and advocacy.

The Cold War was a period of tense relations between the United States and the Soviet Union and their respective allies in a political struggle between democracy and communism.

While there were no direct military conflicts between the two global superpowers, the United States and the Soviet Union led campaigns against one another through political maneuvers, espionage, propaganda, arms buildup, and instigated conflict in other countries, also known as proxy wars.

The Cold War greatly shaped the policies of the United States. The international spread of communism, the threat of nuclear war, and the growing power of the Soviet Union were of utmost concern to American policymakers and prompting them to pivot their foreign policy in response.

U.S. officials feared that Soviet influence was driving nationalist movements in Africa and Asia. In response, the United States implemented a foreign policy of containment against the Soviet Union, a strategy first articulated by U.S diplomat George F. Kennan in 1947, to stop the international spread of communism.