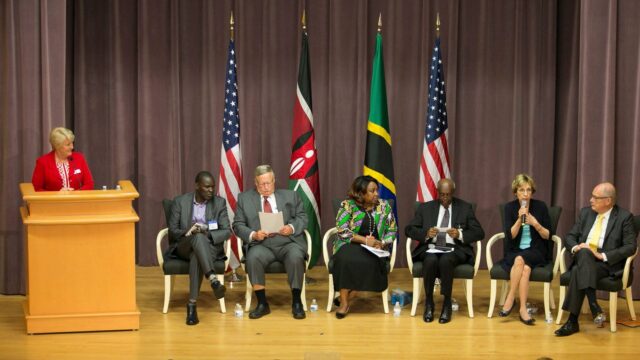 Commemorating the 20th Anniversary of the East Africa Embassy Bombings

On the morning of August 7, 1998, two U.S. embassies in Africa fell victim to coordinated and nearly simultaneous truck bombs – later linked to the terrorist organization Al-Qaeda. 56 U.S. government employees, contractors, and family members were killed. However, from the ashes, countless survivors pulled together and rebuilt strengthened and resilient communities.

In commemoration of the 20th anniversary of the attacks, the National Museum of American Diplomacy, working in collaboration with Ambassador Prudence Bushnell and Ambassador John Lange, hosted an event where survivors related their personal stories, acts of courage, and opportunities for leadership.

Held in the Burns Auditorium at the U.S. Department of State, panelists included ambassadors and four embassy employees who experienced the attacks firsthand in 1998. The four embassy employees were serving from the two different embassies at the time of the attacks. They shared how they served their communities in the face of the ultimate tragedy. Ambassador Barbara Stephenson, President of the American Foreign Service Association (AFSA), moderated the discussion. To complement the commemoration, AFSA published personal accounts by survivors from each embassy in their July/August 2018 edition of the Foreign Service Journal.

In opening remarks, Mrs. Susan Pompeo expressed the support of her husband, Secretary of State Mike Pompeo. Also speaking USAID Administrator Mark Green, who was U.S. Ambassador to Tanzania from 2007-2009, expressed the strength of the relationships we have today between the United States, Kenya, and Tanzania. Assistant Secretary of State for African Affairs Tibor Nagy reiterated the themes of remembrance, reflection, and resilience. Further, he emphasized these themes as countries look ahead to continue partnerships and bonds that were strengthened despite the attacks.