This suit is stained with Ambassador Prudence Bushnell’s blood from the injuries she sustained during the August 7, 1998, attack on U.S. Embassy Nairobi, Kenya. That morning, the U.S. embassies in both Nairobi and Dar es Salaam, Tanzania were attacked in coordinated truck bombings. Suicide bombers parked trucks loaded with explosives outside each embassy and almost simultaneously detonated them. In Nairobi, approximately 212 people were killed and an estimated 4,000 wounded, while in Dar es Salaam the attack killed 11 and wounded 85. At the time of the bombing, Ambassador Bushnell was meeting with the Kenyan Minister of Commerce in a high-rise building across from the embassy’s rear parking lot. Bushnell and the others present were blown to the floor when the explosion hit, sustaining injuries from the force of the explosion and flying glass and debris. She was assisted down several flights of stairs and out of the severely damaged building to safety. 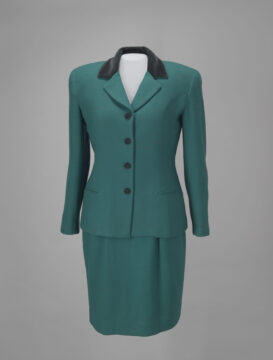 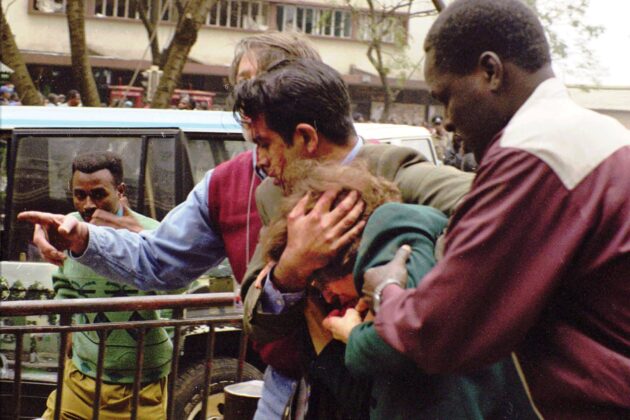 On August 7, 1998, at 10:30 AM, U.S. embassies in Kenya and Tanzania fell victim to coordinated and nearly simultaneous truck bombs, later linked to the terrorist organization Al-Qaeda. At the time of the bombing, U.S. Ambassador Prudence Bushnell was meeting with the Kenyan Minister of Commerce in the high-rise bank building across from the embassy’s rear parking lot.