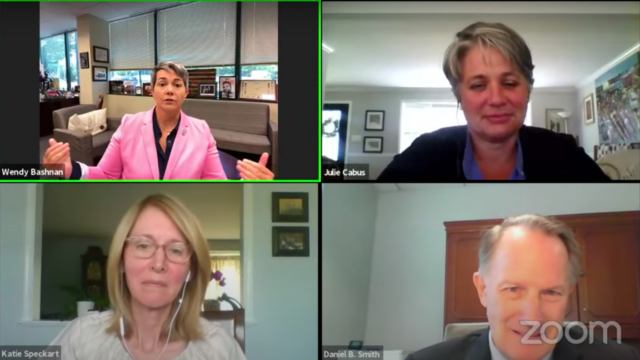 On July 28, 2020, NMAD partnered with the Department’s Foreign Service Institute (FSI) and Bureau of Diplomatic Security (DS) for a virtual panel recognizing the late Patricia “Patti” Morton (1935-2019) as a Hero of U.S. Diplomacy. Heroes of Diplomacy is a program run by FSI with support from the Una Chapman Cox Foundation with the goal of recognizing current and historical heroes who made outstanding contributions to American diplomacy.

Patricia Morton was remarkable in that not only was she the first woman to be a Diplomatic Security agent, but she also pioneered many security techniques and practices that are still in place today. FSI Director Ambassador Daniel B. Smith opened the event with Morton’s accomplishments, stating that she met challenges with “grace, focus, and commitment.” DS Training Deputy Assistant Secretary Wendy Bashnan told how Morton’s work was integral for the creation of current personal safety training and emergency preparedness plans.

NMAD Associate Curator Katie Speckart gave a presentation full of artifacts and images that Morton donated to NMAD, telling the story of Morton’s 29-year career at the Department. Along with serving on protective detail for Princess Grace of Monaco, Morton contributed to the Department’s emergency preparedness response during the Vietnam War, implemented the first personal defense security trainings, and advocated for diverse recruitment and hiring practices.

DS Acting Deputy Assistant Secretary Julie Cabus added how the advancements Morton made in the Bureau of Diplomatic Security and the Department of State as a whole remain integral to the service, especially to women in DS.