Patti Morton was a trailblazer for women’s rights at the U.S. Department of State. In 1972, Morton became the first woman Diplomatic Security Special Agent. One of her other trailblazing roles was as a regional security officer in Saigon, South Vietnam in 1974 where she managed the Marines who guarded the embassy. The Marines welcomed her as one of their own and gave her a camouflage uniform so that she would fit in with them on the target shooting range. This framed practice target speaks very clearly to her nickname, “Pistol Packin’ Patti,” and that she was renowned for her natural shooting ability. She was proud of the fact that she was judged proficient with the full range of weapons that the Marine guards were trained to use. Patti Morton advocated for women to do any job without restriction. Throughout her career, she strived to make it easier for the women who would follow her. She became an inspiration to many, fighting for the fair and unbiased treatment of women in the diplomatic workforce. 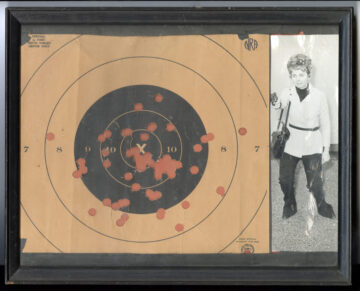