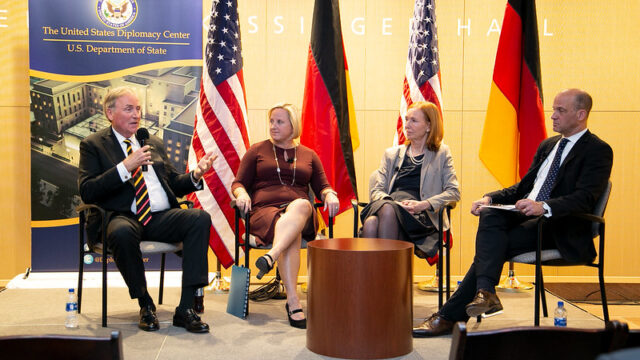 Wunderbar Together: A Year-Long Celebration of German-American Friendship

In October, Germany kicked off Wunderbar Together, a major, year-long initiative to celebrate the Year of German-American Friendship (“Deutschlandjahr USA”).

An initiative of the German Federal Foreign Office, implemented by the Goethe-Institut, and with support from the Federation of German Industries (BDI), Wunderbar Together showcased the transatlantic partnership, highlighting areas of German-American cooperation in business, industry, politics, education, culture, science, civil society, and sports and lifestyle. This initiative culminated in the Fall of 2019 with the 30th anniversary of the fall of the Berlin Wall.

To mark this kick-off, the National Museum of American Diplomacy, the Diplomacy Center Foundation, and the German Embassy hosted a panel discussion on U.S.-German relations, followed by a reception. The panel included Dr. Steven S. Sokol, President of the American Council on Germany, German Ambassador Emily Haber, and former U.S. ambassador to Germany Robert M Kimmitt.

The National Museum of American Diplomacy featured its segment of the Berlin Wall that bears the signatures of world leaders who worked to end the Cold War.