In April 1971, nine players from the U.S. Table Tennis team took a historic trip to China. Their trip was the start of what became known as “ping pong diplomacy” and helped lay the groundwork for establishing official diplomatic relations between the United States and the People’s Republic of China. Connie Sweeris, one of the nine players, kept this menu from one of the many banquets they were invited to during the trip. Featuring eight or more courses, the banquets introduced them to unfamiliar foods. Players were provided with translated menus so they could understand what they were being served. 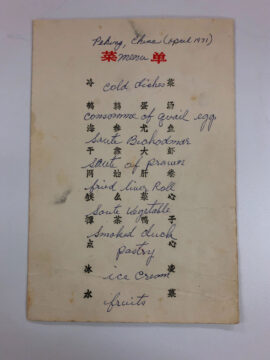