U.S. Vice President Richard Nixon and Soviet Premier Nikita Khrushchev famously debated the merits of communism versus capitalism while on a tour of the American National Exhibition in Moscow in 1959, pausing at the display of a modern kitchen. U.S. Embassy Moscow Public Affairs Officer Hans Tuch accompanied Nixon on this tour and provided impromptu translation for Khrushchev during another tour of an art exhibit. Tuch was awarded this unique tongue-in-cheek certificate afterwards. 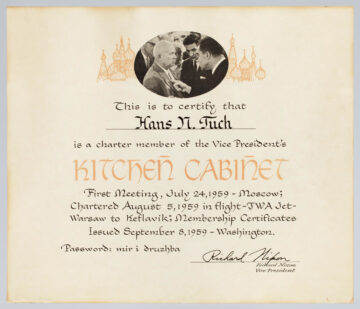