Kathryn Koob was a Foreign Service Officer who was serving in Tehran when the American embassy was seized by Iranian militants on Nov. 4, 1979. She became one of two women who were held hostage during the entire ordeal. After their release on January 20, 1981, following 444 days held as hostages, Koob and 51 other Americans began their long journey home. After a short stay at a U.S. military base in Germany, they stopped in Shannon, Ireland for refueling while enroute to the United States. Greeted at the airport by Ireland’s prime minister and treated to a buffet with sandwiches and Irish coffee, they also had the opportunity to do some shopping. Koob picked up a cameo ring, a blue shawl, and this knit tam – a beret-style hat she is seen wearing during the group’s arrival in the U.S. at Andrews Air Force Base on January 27, 1981. 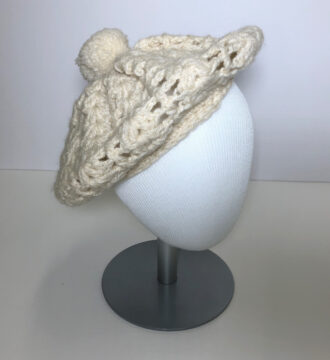