Born to parents who immigrated to the United States from Lebanon, Philip C. Habib grew up in New York and joined the Foreign Service in 1949. Habib became a renowned diplomat over his 30+ year career, first for his service and expertise in Southeast Asia — including a prominent role in the Vietnam peace talks that resulted in the 1973 Paris Peace Accords — and later for his role as a peace negotiator in the Middle East. Habib was aided by his Lebanese background when called out of retirement by President Ronald Reagan in 1981 to serve as his special emissary to the Middle East, spending two years in successful pursuit of a ceasefire in a conflict in Lebanon. He received this Presidential Medal of Freedom from President Reagan in 1982 in recognition of his work in Lebanon. 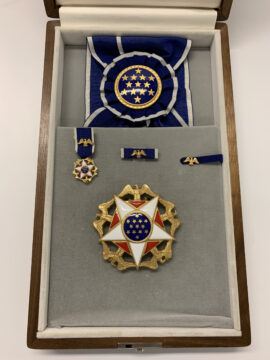 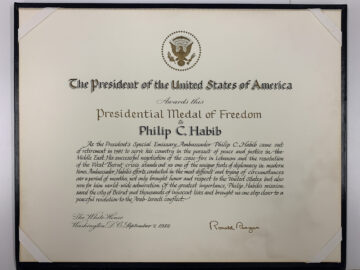