Printing of 1778 Treaties with France

The Treaties of Amity and Commerce and of Alliance were arguably the single most important diplomatic success of the colonists during the Revolutionary War. Signed in Paris on February 6, 1778, they created an alliance with France that was crucial to American victory in the conflict. Benjamin Franklin, Silas Deane, and Arthur Lee served as the American delegates for the negotiations. This is one of 300 copies commissioned by the Continental Congress and printed by John Dunlap, who is famous for having printed the first broadsides of the Declaration of Independence in 1776. 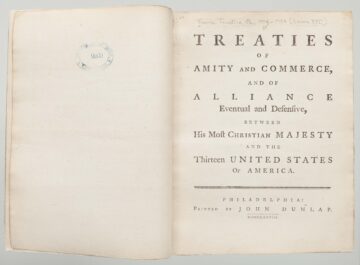