William K. Payeff was a career Foreign Service Officer with the U.S. Information Agency. Prior to his diplomatic service, he served in the army during World War II and participated in the D-Day invasion of France. He was awarded a bronze star for bravery. His Foreign Service commission is unusual in that multiple positions are listed for his service at U.S. Embassy Paris: Foreign Service Information Officer, Consular Officer, and Secretary in the Diplomatic Service. The commission is dated October 7, 1968. 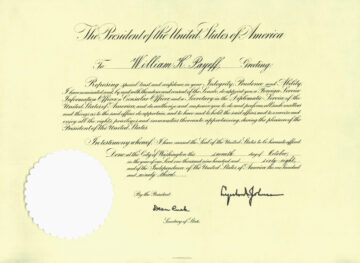