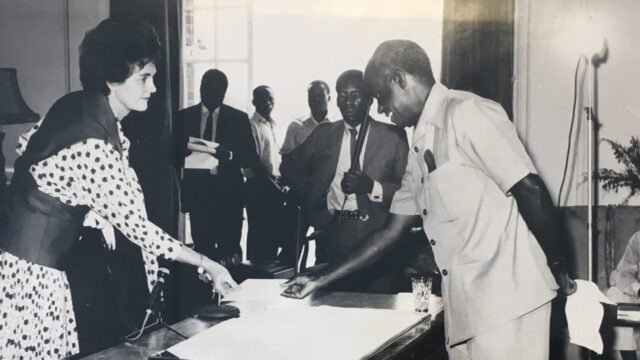 Throughout her many years of diplomatic service, Ambassador Jean Wilkowski demonstrated leadership, vision, and courage, whether serving in a temporary position that opened opportunities for women during World War II, to being at the highest levels of American diplomatic representation in Central America and Africa. Her career is an inspiring story.

This is October 1944 and we’ve lost a lot of men to the Armed Forces. We’re literally scraping the bottom of the barrel for [State Department] recruits.

In the early 1940s, Jean Wilkowski planned to become a foreign correspondent for a news organization after graduate school and had accepted a press job in Chicago. Just before starting this position, a colleague suggested that she check out the Department of State and even wrote her a letter of recommendation. It was 1944, the country was in the midst of World War II, and the Department of State had a staffing shortage.

Wilkowski was hired into the Foreign Service Auxiliary – a Congressionally authorized program that enabled the Department of State to hire diplomatic personnel outside of the usual examination process for the duration of the war. After the war, Auxiliary members were offered the opportunity to take the entrance exam. Several women, including Wilkowski, joined the regular Foreign Service ranks following this path.

In her early years as a foreign service officer, Wilkowski held positions of increasing responsibility in consular work, economic analysis, and political reporting in countries in the Caribbean, South America, and western Europe. She became an expert in trade and commercial relations, representing U.S. interests in various international forums.

In 1966, she assumed the role of Deputy Chief of Mission – second-in-command at U.S. Embassy Tegucigalpa, Honduras. During a period of transition between ambassadors in 1969, Jean also served as Chargé d’Affaires in Honduras, making her the first woman to act as U.S. ambassador to a Latin American country.

It was a time for rapid decisions, sound decisions, and judgments. We were attacked many times by demonstrators, and I had to give clear and careful instructions to the Marine Guard Detachment.

–Jean Wilkowski, recalling her experience during the conflict between El Salvador and Honduras

As Chargé d’Affaires, she led the embassy’s response to a deadly conflict that broke out between Salvadorans and Hondurans over land occupation and use. She simultaneously managed the U.S. response to the humanitarian crisis of thousands of displaced Salvadorans who were incarcerated in Honduras and requests from the Honduran government for arms assistance from the United States.

The U.S. ambassador in neighboring Managua, Nicaragua apparently did not feel that Wilkowski – a woman acting ambassador – was handling this situation as she should. According to Wilkowski, Embassy Managua’s reporting to Washington, D.C. was overly sympathetic to the actions of the Salvadoran military against Honduras. He sent his embassy’s political officer to Tegucigalpa to intervene in the situation. Wilkowski recalled, “We managed to clip his wings, set him straight and send him back.”

Obviously men preferred to compete with their own. There was no open jealousy, it was always subtle and unspoken, but felt. I had to ignore it and get on with the job.”

On September 26, 1972, Ambassador Jean Wilkowski presented her credentials to President Kenneth Kaunda of Zambia as the third U.S. ambassador to this newly independent nation and as the first female U.S. ambassador to an African country. The Zambian president did not receive her until three weeks after her arrival in the country – an unusually long time – as a sign of his displeasure with U.S. engagement in Vietnam.

She served in Zambia during a time of regional political upheaval, with freedom and independence movements fomenting in neighboring colonized countries. Leaders of these liberation movements frequently found safe haven in Zambia. Wilkowski sought permission for U.S. government representatives to speak with and get to know these leaders. Although Secretary of State Henry Kissinger was initially opposed, Wilkowski convinced him that such talks would serve to strengthen future bilateral relations once these colonies became independent nations.

Recognizing the power of cultural diplomacy, Wilkowski welcomed American jazz legend Duke Ellington and his orchestra to Zambia in late 1973 during his final appearance as a Jazz Ambassador for the State Department. Ellington and his orchestra played at the Zambian state house for Mrs. Betty Kaunda, with Wilkowski and Zambian officials in attendance. Ellington also played for a full audience at the Mulungushi Conference Center in Lusaka.

Wilkowski knew that the United States needed to be an economic player in Zambia. She worked with the regional agricultural attaché on farming initiatives so Zambians could grow more of their own food rather than rely on imports. She negotiated the first Food for Peace agreement (PL 480 loan) between the United States and Zambia, providing much-needed foreign assistance to help feed Zambians and grow their economy. The final agreement was signed in August 1976, just after she left Zambia.

In retirement, Wilkowski was also a “first” for the National Museum of American Diplomacy (NMAD). She was the first person to lend personal artifacts to the museum. She put several artifacts representing her diplomatic career on long-term loan to NMAD in 1998, just as plans for the nascent museum were initially forming. Wilkowski passed away in 2016, and in 2018 her estate donated these items permanently to the museum collection. Reflecting on the skills that helped her during her successful career, Wilkowski stated, “I found that my imagination was probably one of my stronger points.” She certainly imagined that NMAD would be an ideal museum to honor her diplomatic legacy.