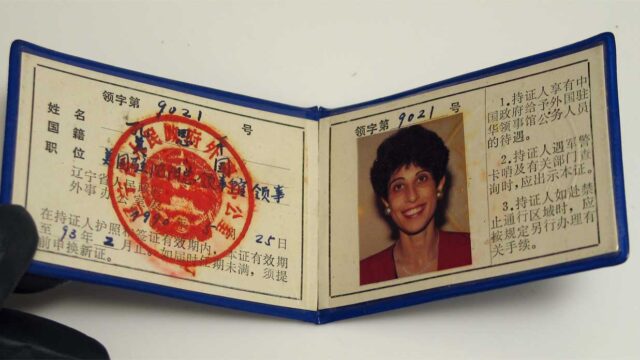 Ruth is the daughter of Austrian immigrants who fled Vienna in 1938 after the Anschluss. They were granted visas by the U.S. consulate thanks to a distant relative in Texas who agreed to be named as their sponsor. Her parents ultimately settled in Ohio and began a new life.

Ruth was part of the first undergraduate class at Yale University that admitted women. Her limitless curiosity, gregarious nature, and keen interest in world cultures made her a perfect candidate for the Foreign Service.

After working at the Council on Foreign Relations in New York, she joined the U.S. Information Agency in 1979. Her first post was in Belgrade (former Yugoslavia) and she assumed that she was destined to spend most of her career in European countries. Instead, Ruth would serve multiple times in China, both as an active-duty Foreign Service Officer and later during retirement on temporary duty.

After Belgrade, she entered Chinese language training and then served as the Assistant Press Officer at U.S. Embassy Beijing from 1984 to 1986. Any awkwardness or difficulties that Ruth encountered with her Chinese counterparts was not due to her being a woman, but rather due to her being a foreigner. U.S.-China relations were still very new at this time and any sort of gathering, especially with press, was entirely choreographed and limited to official, formal events.

Northeast China, except for Russia and Japan, was not the center of great external relations with the rest of the world. Manchuria was off there, cold and remote. There were many institutions who had little or no external contacts, not only with Americans but with other countries. And we were just beginning to build. So there was caution, hesitation and uncertainty.

During her second tour in China from 1989 to 1991, she served in a remote “frontier” consulate in Shenyang (Northeast China) as the Public Affairs Officer. The consulate had a small and entrepreneurial staff: five U.S. officers and several locally employed staff. Larger U.S.-China relations had suffered a setback due to the Chinese Government’s violent suppression of demonstrations in Tiananmen Square on June 4, 1989. Despite the chilly relations and being posted in a gritty industrial and military town, Ruth cultivated relations in the province wherever and however she could.

I found a great deal of possibility in official programs that we did which were somewhat new or fairly new. We were able to expand in a number of cultural and educational and press exchange areas which surprised me.

Her creative programming and outreach with Chinese counterparts opened doors and built confidence and trust with the United States. Ruth also effectively empowered her Chinese staff to utilize their knowledge and skills to further the consulate’s overall goals.

…without these employees I could be the same person with the same mission with the same diplomatic training from Washington and with the same intermediate Chinese language fluency, but I would not have known whom to go to for “permission,” or to invite so-and-so because that will help promote the program among the provincial government officials, etc. So it was a very extensive personal network that the staff was able to advise me on. And in China, as you know, that helps to get things done.

Ruth’s Chinese diplomatic identification card is a typical document that many countries issue to foreign diplomats. It also represents the unique environment in which she served. The card was issued in 1990 while she was serving at the U.S. Consulate Shenyang. It states her Chinese name and that it was issued by the “foreign affairs office” of the provincial government with their red stamp. The text next to her photo instructs that the bearer of the card (1) has special status given to them as a foreign diplomat; (2) that she is to present this card if police or military encounter her; and (3) that if she needs to leave the consular district, she has to notify the provincial foreign affairs office. At the time, diplomats at the Shenyang consulate were given a 25 mile radius of free movement without having to report to the provincial government.

Of her experience as a Foreign Service Officer, Ruth said, “It was a blast!” She thoroughly enjoyed the egalitarian nature of learning languages at the Foreign Service Institute. All ranks, from the most junior to the most senior, get an in-depth language training experience that develops an esprit-de-corps among the officers. Ruth also said she was “very lucky” to have had pioneering experiences in China. She found it gratifying to be given the opportunity as a USIA officer to do new things – making people-to-people connections – that made a difference and paved a path for diplomats serving in China today.