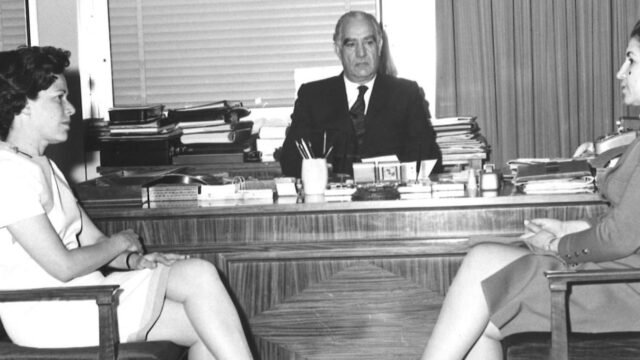 Foreign Service Officer Lois Roth was an expert practitioner of the art of cultural diplomacy. Cultural diplomacy encourages mutual understanding through dialogue and exchange of a nation’s performing, visual, and literary arts. She joined the U.S. Information Agency (USIA) in 1966 after several years with the American-Scandanavian Foundation as well as time as a Fulbright scholar. For her first USIA assignment, she served as deputy to the Cultural Affairs Officer at U.S. Embassy Tehran, Iran. She soon became the director of the flourishing Iran-American Society (IAS). The IAS was a vital tool for people-to-people outreach with Iranians providing English language learning opportunities, cultural exchanges, and fine and performing art programs. During Lois’s tenure, the IAS became a significant and sought-after convening space for artists and Iranians from all over the country.

Lois was featured in a circa 1970 Department of State recruitment publication The Global Communications Revolution, in an article titled, “The Foreign Service and the Single Girl.” The article positions Lois as somewhat of a novelty: “How does she, a career woman in the Foreign Service, find the role of a female representative of the United States?” In response Lois states, “Many people ask me if it’s difficult to function as a woman executive in the Foreign Service, particularly in a Middle Eastern country. Well, I’ve found many more advantages than disadvantages. True, at the outset I had to prove myself capable, but what man doesn’t?” The illustrations in the article are based on photographs of Lois at work as director of the IAS.

After Iran, Lois held several positions at the Department of State and abroad devoted to promoting effective and creative cultural diplomacy. In the early 1980s, Lois became president of the Women’s Action Organization (WAO), a group that represented and advocated for the interests of women in foreign affairs agencies. Lois’s duties included testifying before Congress about the implementation of the Foreign Service Act of 1980. The act included a mandate for the Department of State to make the Foreign Service more “representative of the American people” by recruiting, hiring, and promoting women and minorities.

Lois also published a widely praised article entitled “Nice Girl or Pushy Bitch: Two Roads to Non‐Promotion,” where she related her experience serving on two Foreign Service promotion panels, ten years apart. She analyzed how women officers were kept, or kept themselves, from promotions by playing into stereotypes.

Lois passed away in 1986. Her husband established the Lois Roth Endowment to carry on her legacy of support and advocacy for cultural diplomacy, women, and young people worldwide.