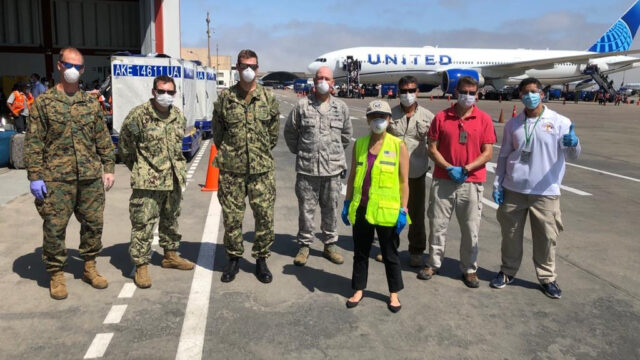 When Peru’s commercial airport closed to all travel on March 23, the U.S. Embassy in Lima swung into action, engaging with the Peruvian Government to repatriate more than 7,000 American citizens from across the country amidst closed borders and strict Peruvian quarantine and curfew measures.  The embassy utilized buses, small aircraft, and other modes of transportation to bring people in from remote provinces, including the mountainous Cusco region and parts of the Amazon only accessible by boat.

Using a whole-of-government and whole-of-embassy approach, embassy staff from multiple agencies, including the Department of Defense and the Drug Enforcement Agency, utilized an airplane hangar managed by the State Department’s International Narcotics and Law Enforcement Bureau to process thousands of American citizens.  A six-person “flyaway team” from the Bureau of Consular Affairs provided additional support by developing flight manifests, issuing passports, and processing thousands of promissory notes.

Post utilized a “radical transparency” approach to public messaging that better informed U.S. citizens in Peru and the public generally through their website, local media, email, and social media.  State Department Principal Deputy Assistant Secretary Julie Chung traveled to the country to boost Embassy Lima’s efforts through highly visible personal outreach to government officials and American citizens.  State Department staff in Washington, at the Embassy, and at other posts around the world, including China and Brazil, answered real-time inquiries by email and phone.  This interagency call center worked to confirm citizens were ready to fly, providing the human contact essential to reassure individuals who had expressed their fears of being “left behind.”

Photos from COVID-19 Repatriation Efforts for the Western Hemisphere