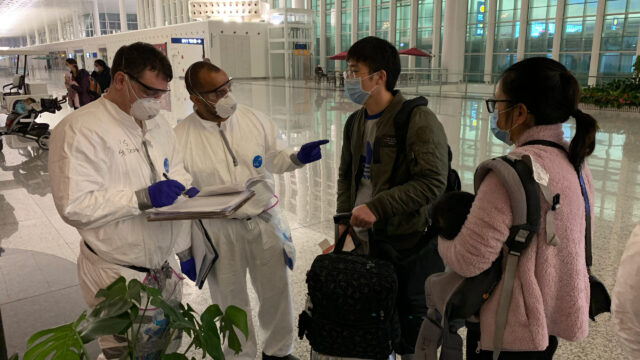 Despite their training for a variety of pandemic scenarios, Consulate General Wuhan staff was shocked by how rapidly the disease spread throughout urban areas.  The Chinese government instituted a lockdown in Wuhan on January 22.  Within a few hours, all activity in the city ceased.

“It literally happened overnight. It caught everybody by surprise, including the city officials,” said Russell Westergard, the Deputy Consular Chief in Wuhan, China.

Consulate staff responded quickly, forming a Task Force focused on the repatriation of American citizens from Wuhan.  On five separate flights between January 28 and February 6, the Department of State evacuated 1,072 American citizens and their family members from the epicenter of the coronavirus outbreak.

With the rapid spread of the coronavirus, the Wuhan Task Force soon expanded, becoming the Coronavirus Global Response Coordination Unit (CGRCU).  On March 19, shortly after The World Health Organization declared the COVID-19 outbreak a “pandemic,” the CGRCU created a Repatriation Task Force to assist U.S. citizens abroad and coordinate their evacuation.

Since the first flight from Wuhan on January 28, the Department has brought home more than 80,000 U.S. citizens on 872 flights from 133 countries.