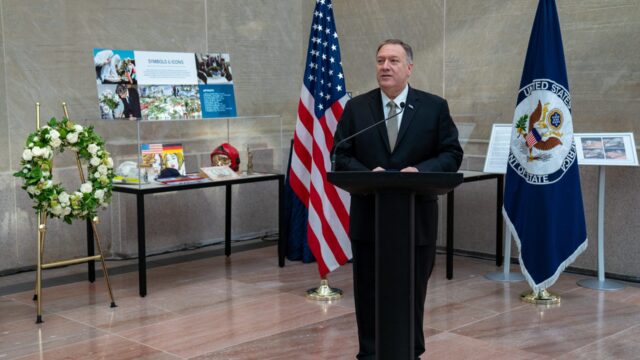 It’s been 18 years since the September 11 attacks left nearly 3,000 people dead in the worst act of terrorism the nation has ever experienced. Marking the 18th anniversary, Secretary of State Michael Pompeo visited the National Museum of American Diplomacy’s (NMAD) September 11 exhibit to remember those we lost on that tragic day, but to also highlight America’s resolve and the global outpouring of support for the United States following the attacks. After laying a wreath to honor the victims, Secretary Pompeo spoke about the Department of State’s unique role in working with our partners noting “September 11th also showed how many friends the U.S. has around the world.”

The National Museum of American Diplomacy’s exhibit showcases America’s resolve including a brick retrieved from Osama Bin Laden’s compound, on loan from the CIA Museum. Secretary Pompeo, who is also the former Director of the CIA, remarked, “May we honor the victims through the defense of our homeland.”   After the attacks, U.S. embassies and consulates received condolence material such as personal mementos, letters, and drawings. Many of these items were shipped to the Department of State in Washington, and now are included in the collections of the NMAD. This condolence material represents unwavering support for Americans in their time of need and a global repudiation of terrorism.

Specific examples from the collection include: