Throughout the Cold War, the United States and the Soviet Union engaged in espionage against one another in the hope of gathering information that could give them some sort of advantage in the relationship, or if a direct military confrontation ever occurred. Efforts to eavesdrop inside secure embassies, or on diplomatic personnel in general, were one such effort. This unusual looking device protruding from a brick is an electronic “bug”—essentially a microphone that could transmit conversations remotely. It was found in the U.S. Embassy in Moscow in the 1960s by Diplomatic Security personnel conducting a search for such devices. The narrow “stick” protruding from the electronics (the end with the wire) was a hollow tube that could covertly protrude through a very narrow hole drilled through a brick. The sound would travel through the hollow tube and into the electronics, which allowed them to be transmitted. 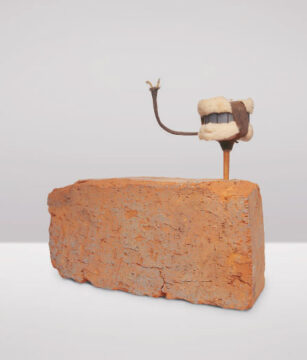