Dr. Ralph Bunche’s diplomatic career spanned from the mid-1940s to around 1970. Honored by the State Department as a “Hero of Diplomacy” in 2020, his many accomplishments include participating in the formation of the United Nations and brokering an armistice in the 1948 Arab-Israeli war, for which he was awarded a Nobel Peace prize in 1950. Dr. Bunche was the first African American to win such an honor. This page of signatures is from Bunche’s personal copy of the Egyptian-Israeli General Armistice Agreement of February 1949, one of the several armistice agreements signed after the official end of the war. The signatures are those of individuals who worked with Bunche on the agreement. 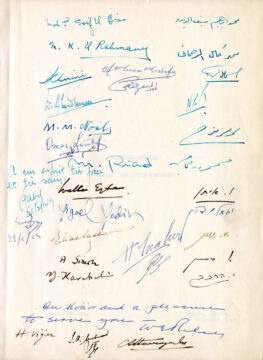