U.S. diplomat Henry White’s pass to visit the exhibition at the 1910 Pan-American Congress in Buenos Aires, Argentina. White, whose 30 year diplomatic career included serving as Ambassador to Italy and France, was once praised by President Theodore Roosevelt as “the most useful man in the entire diplomatic service.” 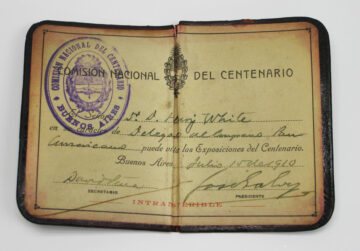