Issued to Hulda Ingejärd Enebuske (“Euebuske” on the passport) in April 1918, this passport lists her destination as France and the reason for her travel as “Service with Harvard Surgical Unit”. At the bottom left, under her physical description, her occupation is listed as “nurse” – which her photograph, in a nurse’s uniform of the period, clearly supports. Enebuske served as a nurse with the Harvard Surgical Unit, or HSU, from 1916 to 1918. The Unit, organized by Harvard Medical School and staffed with volunteers, helped wounded soldiers and was attached to the British Expeditionary Force and stationed in Camiers, France from 1915 until the end of World War I. Although the United States did not join the war until 1917, civilian volunteers – particularly medical personnel such as doctors and nurses – joined “relief work” privately through efforts such as the HSU. 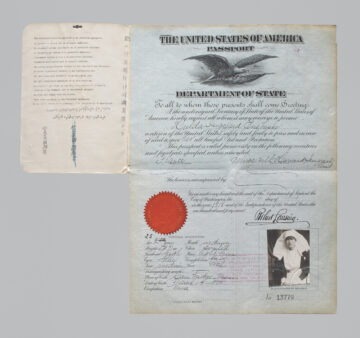