Shortly after her marriage to American diplomat Ellis O. Briggs in May 1928, Lucy Barnard Briggs received this diplomatic passport and traveled with him to his post in Lima, Peru. After the birth of her children, their photos and personal details were appended to pages in this passport — as was the practice at this time, instead of issuing them their own separate passports. Briggs and her children used this passport to travel to subsequent Foreign Service posts until 1941, when she was issued a new passport. 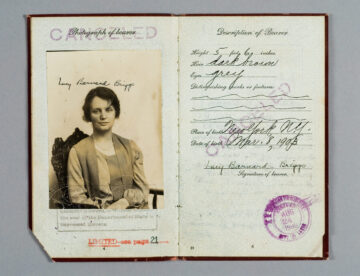