Photograph of the 2nd Foreign Service class to graduate under the auspices of the Rogers Act of 1924, which merged the separate U.S. diplomatic and consular services into the combined Foreign Service. This photograph was taken in September 1925 on the steps of the State, War, and Navy Building (now the Eisenhower Executive Office Building) next door to the White House, upon the entry of this class into the service. They graduated in July 1926. Undersecretary Joseph C. Grew is pictured first row, third from the right. 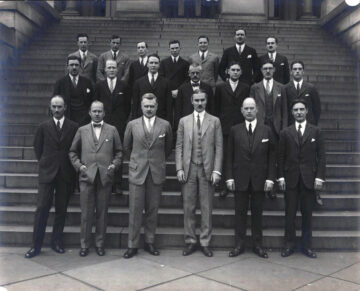