In the late 1970s, after decades of war, Egyptian President Anwar Sadat and Israeli President Menachem Begin sought a peaceful resolution to the conflict between their neighboring countries. As part of this effort, President and Mrs. Carter traveled to Egypt on March 9, 1979, to meet with President and Mrs. Sadat. They traveled by a specially chartered Egyptian Railways train from Cairo to Alexandria and stayed in the Ras-al-Tin Palace. 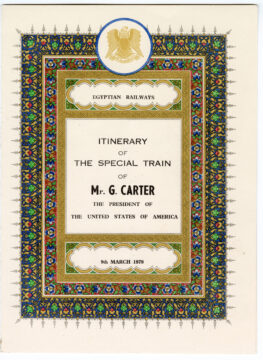