The first Japanese delegation to the U.S. included 77 representatives led by three samurai.

In 1853, American Commodore Matthew Perry led a small squadron of U.S. Navy warships to Tokyo Bay with the goal of establishing relations with Japan.

Perry meant to use force if the nation refused, but the Japanese had already determined to negotiate a treaty, and no shots were fired.

The expedition laid the groundwork for a trade agreement between the United States and Japan. The use or threat of military force to advance foreign policy objectives became known as “gunboat diplomacy.” 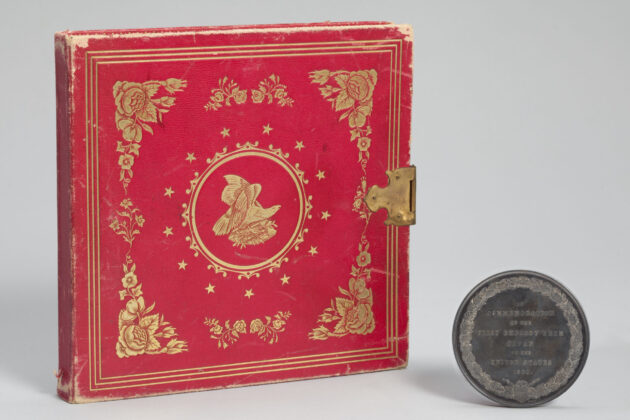 The Japanese delegation presented President Buchanan with elaborate gifts, including silk screens, swords, and porcelains. In return, Secretary of State Cass gave them commemorative medals featuring the President’s likeness. Collection of the National Museum of American Diplomacy.
View the Medal

Why do Diplomats Give Gifts?

Gifts are symbolic reminders of the friendships between nations and leaders. Diplomats give and receive gifts to show respect and cultivate relationships. Carefully chosen gifts honor the recipient and reflect the essence of a nation, its culture, and people.

In the 1850s, after more than 200 years of self-imposed isolation, Japan opened up to trade dialogues with the United States and western Europe.

The first Japanese delegation to the United States arrived in Washington, D.C. in 1860. They delivered a trade agreement, negotiated by Commodore Matthew Perry, which opened select Japanese ports to American trade.

The Japanese diplomats met with Secretary of State Lewis Cass and President James Buchanan, whom they presented with lavish gifts of state.

The landmark treaty they signed remained in place for 40 years and fostered an economic partnership that continues today.