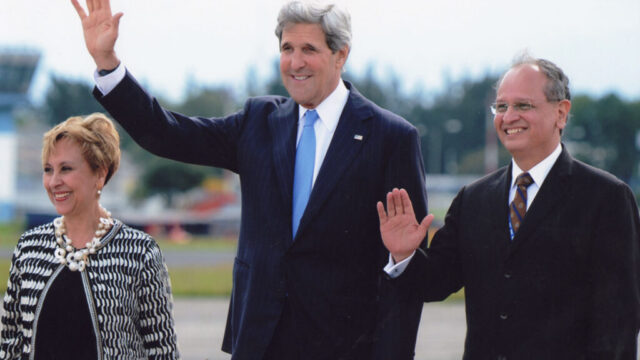 From Mentee to Mentor: Ambassador Arnold Chacon and Leadership in the Foreign Service

Ambassador Arnold Chacon has served as a diplomat in the U.S. Foreign Service for 40 years. His dedication to his career as a public servant began early through his years of volunteer service in Latin America as a teenager and young adult. Throughout his time as a diplomat, his mentors taught him valuable lessons and skills as a leader in his community.

“For generations, few in my family ventured far from home, so nothing in my background and upbringing would have suggested that a career in international relations or public diplomacy was in my future,” he noted.

His mother Helen was intrigued by a story in the Denver Post about young Americans who spent their summers as public health volunteers in Latin America. She knew her son was interested in a future career in medicine and thought this would give him valuable experience.

This story led him to the youth development non-profit organization called Amigos de las Américas (AMIGOS). The premise was simple: by living and working in developing Latin American countries, you could improve your Spanish, gain confidence, build leadership skills, make an impact, and learn about the world through an international lens. With the idea that medical school might be in his future, Chacon jumped at the chance to indulge his passion for Spanish, foreign travel, and community service as a public health practitioner through AMIGOS. He administered vaccines against measles, diphtheria, pertussis, and tetanus in rural Latin America.

Chacon recalled how this experience transformed and helped him develop important leadership and management skills through negotiating partnership agreements with local government officials in Nicaragua, Honduras, Ecuador, and Mexico.

During his service in Mexico, Chacon met and was encouraged by a USAID (United States Agency for International Development) Foreign Service Officer to take the Foreign Service exam.

Chacon joined the Foreign Service in September 1981.He has flourished in his 40-year career as a diplomat, a calling that he could not have imagined as a 17-year-old volunteer setting out to explore Latin America for the first time.

Chacon’s first diplomatic posting was to Honduras, a country he was somewhat familiar with through his volunteer work with AMIGOS.

He waxes nostalgic about the mission led and staffed by many Foreign Service “giants.” These giants included John Negroponte, later U.S. Ambassador to the United Nations, and Crecensio Arcos, a Public Affairs Officer with the U.S. Information Service. Arcos took Chacon under his wing and served as his mentor.

Chacon said, “Cris combined his powerful intellect, engaging personality, and disarming sense of humor to draw in people, both foreign and domestic, effectively amplifying our message without the benefit of today’s social media tools. As Ambassador to Honduras, he used the Embassy’s powerful bully pulpit to challenge entrenched corrupt institutions and individuals, demanding and building respect for human rights and accountability.”

Ambassador Walters was well known for his facility with languages – speaking at least six fluently. This legendary military figure was not your typical diplomat. A self-educated man and history buff, Walters distinguished himself as a soldier, diplomat, and unparalleled raconteur of the first order.

Chacon often traveled and served as Walters’ notetaker at the UN and was very impressed with his skills of persuasion and composure. He seemed to know everybody and everything about the history, internal politics, and the heroes of his fellow diplomats.

As Walters often said: “There is nothing more flattering to a country than referring to an incident in their past.” Walters proved the adage that the element of personal contact needed in diplomacy is greatly underestimated.

After New York, Chacon went on to assignments in Mexico, Chile, Italy, Peru, and Washington D.C. before becoming Deputy Chief of Mission at the U.S. Embassy in Ecuador, where he served under Ambassador Kristie Kenney.

Ambassador Kenney taught him a great deal about inspiring, building, and motivating teamwork. She mentored, energized, and empowered her staff to generate positive action. Chacon says Kenny was “in a league of her own.”

In 2002, a surprise eruption of the stratovolcano known as Reventador occurred in Ecuador, catching the U.S. Embassy team off guard. As Ambassador and Deputy Chief of Mission, respectively, Kenney and Chacon led the response to the largest volcanic eruption in Ecuador in 125 years. Chacon led the effort to keep families calm, direct the distribution of water and face masks, and coordinated with international schools during the chaos.

As Kenney recalls, “The airport closed for about five days due to the ash, and schools were closed as well for safety inspections. …We had a lot of cleanup to do. This is the reason you have talented staff,” she explains. “The biggest mistake leaders make is thinking, ‘I need to know all the answers. I have to pretend I understand all this.’ But there’s absolutely no crime in saying, ‘Who can tell me more about this issue?’ Don’t be afraid of that.”

Chacon also counts on Ambassador Harry Thomas as another role model he served with during his career in the Foreign Service.

As Deputy Executive Secretary, Chacon worked under Thomas to coordinate Secretary Condoleezza Rice’s international travel and supervise the Operations Center, the State Department’s 24/7 crisis communication hub. Like Ambassador Kenney, Thomas appreciated the importance of having confidence in your team, a practice that Chacon would carry on in his future leadership positions.

On Secretary Rice, Thomas noted, “she had so much confidence in us that she would leave us one-on-one in meetings with POTUS [President of the United States]. I doubt any other Secretary has had the confidence to do that. Consequently, we would have run through a wall for her. From that experience, I learned to give other people similar opportunities. You need to give people real opportunities without micromanagement.”

Chacon became U.S. Ambassador to Guatemala in 2011, where he used his mentor’s lessons of leadership while pursuing a strong U.S. agenda to support the rule of law, indigenous empowerment, and economic development in the country.

With a mission of 500 and working in tandem with his Deputy Chief of Mission, Bruce Williamson, he cultivated a close relationship with the United Nations Commission Against Impunity in Guatemala and Claudia Paz y Paz, a criminal law specialist, scholar, judge, and litigator. She became Guatemala’s first female Attorney General in 2010. Ambassador Chacon noted:

Chacon waxes nostalgic about promoting human rights and social inclusion in Guatemala during his ambassadorship.

“At least half of the population in Guatemala is indigenous, disenfranchised, and marginalized. Half of the children under the age of five in Guatemala are chronically malnourished. We worked with the presidential initiative Feed the Future to improve food security and decrease chronic malnutrition with nutrition interventions and agricultural income-generating projects in the areas where the greatest levels of malnutrition occur.”

Throughout his career, Chacon served as a member and senior leader with the Hispanic Employee Council for Foreign Affairs Agencies (HECFAA).

He noted, “Lino Gutiérrez was a founding father of HECFAA. As we mark Hispanic Heritage Month and celebrate the contributions of Hispanic American diplomats, I would like to thank Ambassador Lino Gutiérrez for his advocacy through HECFAA and as the Executive Director of the Una Chapman Cox Foundation to make the Foreign Service more reflective of America’s amazing diversity.”

Chacon continued: “…we could not have a better friend and supporter than Secretary Blinken. He has made it clear that he is committed to ensuring that all voices, including the voices of historically underrepresented or marginalized groups, are part of foreign discussions and that those voices are heard and respected.”

Outside of the State Department, Chacon remains involved in AMIGOS as a board member because, he says, “it was the most consequential experience of my youth and put me on the road to a wonderful career in public service. Like so many first-generation-to-college students, I didn’t know what I didn’t know. As Supreme Court Justice Sotomayor has said about her own unlikely journey, you can’t know you want to be something when you grow up if you don’t know that that thing even exists. But life takes you places you never thought you’d go.”

Chacon served as Special Charge d’ Affaires at U.S. Embassy Ottawa from June to November 2021 before retiring from the Foreign Service. He continues to actively mentor and encourage the next generation to pursue careers in public service so they too can experience a career that can take them places they never thought they would go.