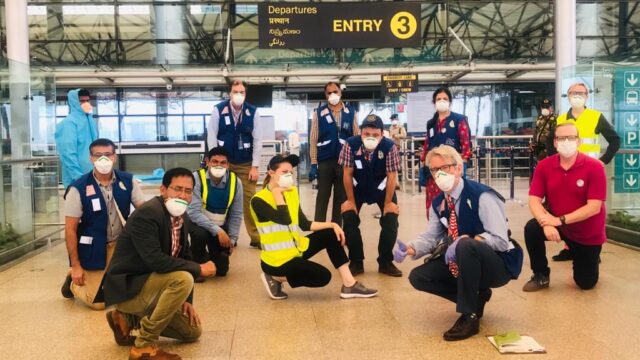 In the face of a national lockdown that grounded air traffic, halted trains, and restricted roadways, the U.S. Mission to India’s top priority was assisting U.S. citizens located across the country’s vast landscape. This complex repatriation operation required extensive planning, logistical support, and consultations with Indian officials throughout the country by the U.S. Embassy in New Delhi and the U.S. Consulates General in Chennai, Hyderabad, Kolkata, and Mumbai. The mission used a combination of buses and chartered domestic flights to help Americans from all over India travel to New Delhi and Mumbai for international flights.  From these two hubs, U.S. government-chartered repatriation flights, supported by United Airlines and Delta Air Lines, finished the final leg of the journey to bring #AmericansHome.

U.S. Mission personnel went above and beyond to assist those most in need.  When a pregnant American citizen in the Himalayan foothills went into labor just days before India announced its national shutdown, the U.S. Embassy arranged transportation to bring the family to a local airport, where they joined 96 other Americans on a chartered flight to New Delhi. The embassy printed the newborn her very first passport for her flight back to the United States.  In Mumbai, two Diplomatic Security teams led caravans of four buses to the State of Gujarat in the North and three buses to the State of Goa in the South. Making dozens of stops along the way, these teams drove over 20 hours to collect nearly 200 U.S. citizens stranded in Goa, Gujarat, and the State of Maharashtra and bring them to Mumbai for their repatriation flight.

On April 5, 99 passengers boarded a charter flight from Kolkata to connect in New Delhi for their U.S.-bound repatriation flight. The Acting Consular Section Chief at the U.S. Consulate in Kolkata recounted, “The Americans kept thanking us over and over again. Most are exhausted in the middle of a long, uncertain trip, but they could see how hard we all worked to make this flight happen. This wasn’t a normal procedure for anyone, but we all worked together as a team and put over 90 Americans onto a flight home. The entire effort was an example of seamless U.S.- India cooperation. We are all exhausted, but it feels good to help our citizens get home.”

As Americans began arriving home, they wrote back to U.S. Mission India staff, thanking them for their guidance, support, professionalism, and kindness.