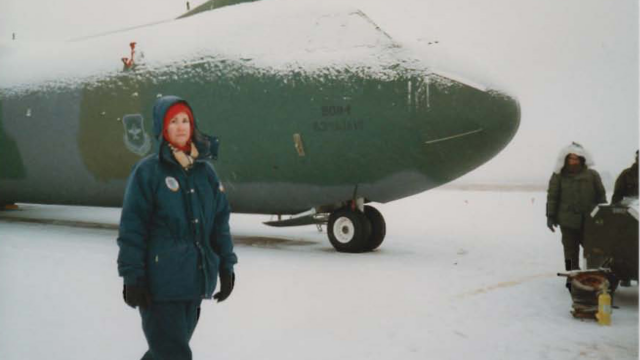 Eileen Malloy was a trailblazing Foreign Service Officer with a long and distinguished career that included two tours in Moscow, service as Deputy Assistant Secretary for East and Central Europe immediately after the Bonsian-Serbian war, a detail to the Secretary of the Department of Energy, consular tours including U.S. Consul General in Sydney, Australia, as well as service as the first female U.S. Ambassador to Kyrgyzstan.

She served in scientific fields (arms control and energy) where women were not yet full participants. During her first tour in Moscow in 1980, she started working in the embassy’s science section. At a reception, the outgoing (male) Science Counselor introduced Eileen to his contacts in the local scientific community by saying, “…in the United States we have equal opportunity, and we’re forced to have all sorts of people in the Foreign Service including women. But it’s really hard to find qualified women so we just make do with what we have.”

At her next post in Calgary as head of the consular section, she attempted to cultivate contacts within local influential professional clubs. This was problematic because the clubs did not admit women and the American consul always had an honorary membership. She was effectively shut out from these clubs where most business is done. On the occasion of a visit by the Premier of Alberta to Calgary, he hosted an event at one of the clubs and invited Eileen as the acting consul general at the time. She tried to enter the club, but was refused: “Over the intercom I was told, ‘sorry you can’t come in. You are a female.’ I said, ‘But I have this invitation here from the Premier.’ They told me to come around to the kitchen, which I did. They took me up to the back steps and snuck me into the private reception room. This was 1985….Being female in the [foreign] service …it’s not a simple thing.”

In 1988, she returned to Moscow. This time she headed a new arms control office implementing the recently ratified Intermediate Nuclear Forces Treaty (INF).

When I arrived in Moscow to take on this huge challenge, bearing in mind that Soviets are not very good about dealing with women, Soviet military even less comfortable dealing with women, I turned out to be a pregnant female. They just did not know what to do with me at all.”

Years of negotiations and summits between the United States and the Soviet Union concerning nuclear arms control and reduction culminated in the INF Treaty. At the time of its signature, the treaty’s verification regime was the most stringent in the history of nuclear arms control, designed both to eliminate all declared INF weapons entirely within three years and to ensure compliance with the total ban on possession and use of these missiles.

In order to get political support in the United States, there had to be a vigorous inspection angle to the treaty. We couldn’t just trust the Soviets when they said that they had eliminated these missiles. We had to have American teams go in and visit sites to make sure that they weren’t there, that they weren’t deployed.”

The treaty called for on-site inspections, observed by diplomats and energy experts, in order to confirm elimination of INF weapon systems. In 1990, Eileen and her colleagues witnessed the destruction of the last of these missiles in Saryozek, Kazakhstan. Before destruction, the missiles were laid out for display, measurement, and verification by inspectors.

We were the ones who translated, met the inspection teams at the airport, made sure that the U.S. military plane was serviced, just got the whole thing going, and then whenever there was as dispute, we would conduct negotiations with the Ministry of Foreign Affairs. But it was all virgin terrain. Nobody had ever done this before so we were making it up as we were going along.”

Eileen Malloy received this unique gift to commemorate this event. A missile fragment, from a weapon eliminated under the INF Treaty, was transformed into a work of art. It was made by a local businessman using fragments from missiles destroyed by the Soviet military. As a diplomatic gift, it symbolizes the hopes for a secure world shared between the two nations. Its transformation also symbolizes the art of diplomacy practiced by Eileen and many other diplomats while working to find peaceful solutions to arms control issues.

Eileen’s tenacity and determination served her well throughout her career, especially as U.S. Ambassador to Kyrgyzstan – a remote former Soviet state and emerging democracy with little infrastructure and experience with western countries.