This gold fountain pen was used by Secretary Kellogg and his 14 foreign counterparts to sign the Kellog-Briand Pact in France in August 1928, after having been gifted to U.S. Secretary of State Frank B. Kellogg by the Mayor of Le Havre, France. The ornate design includes an inscription in Latin: “Si Vis Pacem Para Pacem” or, translated, “If You Want Peace Prepare for Peace." The Kellogg-Briand Pact was crafted by the United States and France in the decade following the end of World War I. This historic treaty pursued the lofty goal of ending war. While the treaty was ultimately unsuccessful in eliminating war, it set a global precedent for peace. 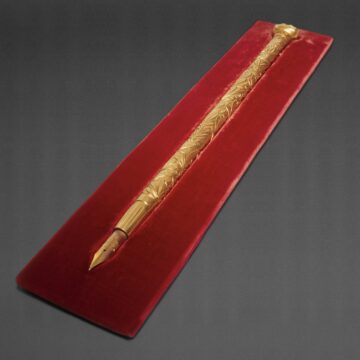 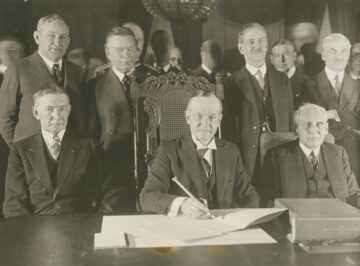 President Calvin Coolidge signs the Kellogg-Briand Pact into law on January 17, 1929, following its ratification by the U.S. Senate. Seated alongside him are Vice President Charles Dawes (left) and Secretary of State Frank Kellogg (right). Coolidge used the same pen, which is part of the NMAD's permanent collection, that Kellogg and his counterparts used to sign the pact. Public domain.

Learn More About the Kellogg-Briand Pact 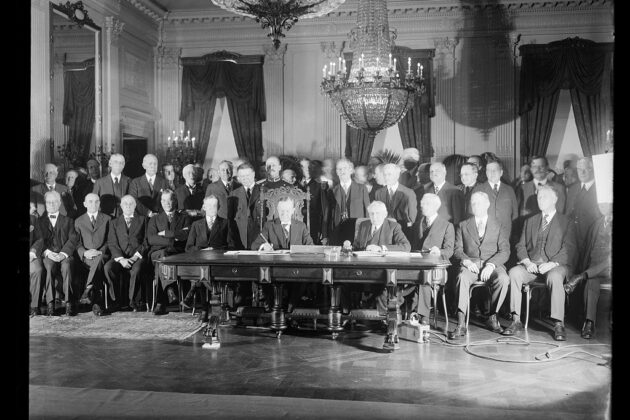 The Kellogg-Briand Pact: The Aspiration for Global Peace and Security

In 1928, United States and France drafted the Kellogg-Briand Pact. This historic treaty pursued the lofty goal of ending war. While the treaty was ultimately unsuccessful in eliminating war, it set a global precedent for peace.

Learn More About the Kellogg-Briand Pact