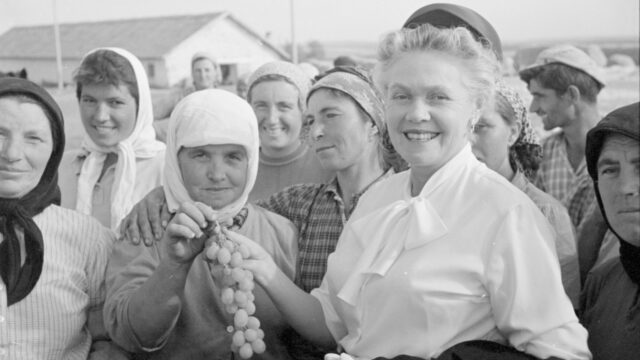 “I think I convinced them that I was not going to be just a gentle woman that they could push around.”

People-to-people diplomacy is when diplomats meet directly with the citizens of their host country, rather than just with official representatives. This type of diplomacy builds strong relationships between nations, supporting trade and economic partnerships that advance prosperity.

Eugenie Anderson, America’s first female ambassador, was a pioneering practitioner of people-to-people diplomacy, which she called “people’s diplomacy.” As U.S. Ambassador to Denmark from 1949 to 1953 and U.S. Minister to Bulgaria from 1962 to 1964, Anderson engaged with the public to promote trade and strengthen economic ties.

Standing Up to Authority

In 1962, she confronted Bulgarian officials after she learned that police were seizing pamphlets distributed by the U.S. Legation at an international trade fair. The pamphlet depicted in photos and text, the abundance of American life, showing well-stocked grocery stores, modern cities, and suburban single-family homes. The authorities backed down, saying they “didn’t know the Americans could be so tough.”

The following year, Anderson demanded that Bulgarian authorities replace the windows of the U.S. Legation after it was attacked by an angry mob spurred on by the government. Anderson routinely displayed images of cultural and intellectual freedom in the legation windows, and continued to do so even after the state-sponsored vandalism persisted.